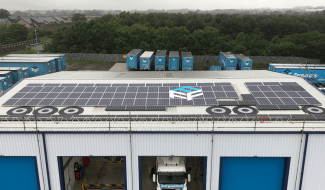 England-based Fergusons Transport will generate a staggering 22% more energy than planned by using Enphase microinverters. To say the least, owner Alan Ferguson is very happy with the results of his solar project.

When was the last time that you saw a rooftop solar system that not only showed a clear commitment to renewable energy but also showcased a unique, eye-catching design? Thanks to the clever, creative minds at SCJ Electrical, Alan Ferguson now owns four high-performing solar systems, two of which that are creatively designed to double as marketing for his businesses.

In 2015, Alan Ferguson, owner of northern England-based Fergusons Transport, decided to invest in rooftop solar to offset his company’s carbon footprint. The transport industry currently relies heavily on fossil fuels, and Alan felt that solar projects would not only reduce his environmental impact, but it would also be a smart investment that would provide him with guaranteed long-term savings.

Alan’s vision was to construct solar systems on four of his buildings, each with its own unique needs and challenges. Luckily, he contracted SCJ Electrical, a leading solar installer with deep experience leveraging the reliability, safety, and flexibility of Enphase microinverters to create highly customizable solar systems.

An eye-catching way to go green

FergySpace, a massive 50,000 square foot self-storage building in Northumberland, was Alan’s first project site for SCJ Electrical. Because FergySpace happens to be located on the Newcastle Airport’s flight path, Alan requested that SCJ build a system that was visually striking from above. Due to the design flexibility enabled by Enphase microinverters, SCJ was able to place solar panels in an unusually playful configuration without sacrificing panel performance. Next time your flight takes off from Newcastle, take a peek out your window – you’ll see the word “FERGY” clearly spelled out in panels on the building’s roof!

Taking advantage of the same flexibility that allowed the “FERGY” design, SCJ combined different solar module sizes to draw an accompanying lorry – complete with painted wheels – on the roof of the neighbouring Ferguson Transport DVSA Garage. In addition to their visual charm, the two systems operate efficiently together to feed the ground source heating system, which further reduces costs on site.

Alan’s other two solar projects don’t have attention-grabbing layouts, but they were designed to optimize system production. At Fergusons Transport’s depot in Sunderland, Enphase microinverters play an integral role in maximizing solar production, despite the fact that shade and bird soiling often covered sections of the roof.

Unlike conventional inverters, Enphase microinverters are installed at each solar panel, which enables each module to operate independently of the others. This means that if one solar panel becomes dirty or shaded, the other panels are not affected and can still operate at maximum capacity. The microinverters appear to be doing their job, too: over four years, the solar system saved a whopping 170 kg of CO2, which is the equivalent of 6,300 trees.

Alan’s fourth solar project layout similarly maximizes solar production at the site, significantly reducing utility bills for all of the tenants in the building.

What are the results of Alan’s four solar projects? A staggering 22% more energy produced than planned over 15 cumulated years of operation! To say the least, he is very happy with them.

“We have created four truly green large-scale renewable projects,” said Alan. “They have saved us money and lowered our carbon footprint. We are now considering adding energy storage to maximise the use of our solar power and are looking at a further installation at another site in 2021.”

He is now considering adding energy storage to further boost savings and maximize the use of his solar power.