Are Solar Leases the Answer to Affordable Solar Systems? 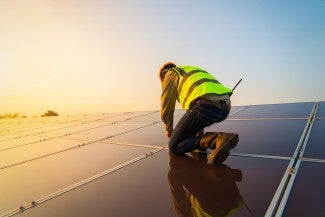 As prices for solar panels have come down in the last decade, solar leases may not be the no-brainer they once were.

In the past, solar panels have been seen by most people as a niche market, restricted to those who had access to sun-bathed roofs and could afford equipment that was often too expensive for average consumers. But in the past decade or so, prices for solar panels have come down considerably, and financing options to put them on your roof have proliferated. A solar lease is one such financing option that can put solar panel systems within reach of more consumers than ever before and has democratized the way solar electricity is distributed.

In this article, we discuss what a solar lease is, how it differs from a power purchase agreement (PPA), the advantages and disadvantages of the arrangement, and provide a glossary of terms that are important to understand when deciding whether to lease your solar panels. We hope this article will help you determine whether a solar lease is right for you.

Think of the first time you heard the term “lease.” Maybe it was in connection with a car, or perhaps you associate lease payments with apartments. What that meant was that you pay a set amount every month, and for that amount you get access to the product, property, or service you need.

Since you don’t own the vehicle or place to live, items like maintenance are usually the responsibility of the owner, whether that’s a landlord or car company. It also saves money upfront since you are not obligated to pay the entire cost of the vehicle or home when you receive the keys.

Solar leasing works in a similar fashion. You pay one set price per month and get solar panels installed on your roof, which can allow you to save between 10% and 30% on your monthly electrical bills. Maintaining the system is the responsibility of the company from whom you’ve leased the panels.

One of the advantages of leasing solar panels is that you can often get a system installed with little or no money down, saving you the upfront investment costs. Leases for solar panels typically last between 20 and 25 years, which reflects the typical lifespan of a system. In general, solar leases cost between $50 and $250 a month.

In contrast, under a solar PPA arrangement, you pay for the actual amount of electricity you use at a set price per kilowatt-hour (kWh). Most consumers are familiar with this model because it is the one typically used by current monopoly utilities.

Choosing between a PPA and a solar lease is really a matter of how you prefer to pay your electricity bills. If you average out variable payments under a PPA, they should roughly mirror the set amount you would pay under a solar lease. If you prefer to be able to budget the same amount each month for your electricity payments, a lease may be right for you. Operating under a PPA arrangement, however, may reflect how much electricity you use more precisely. No matter which payment option you consider, the savings over what you’re paying to your current utility will be about the same—and you get to control your own electricity production instead of leaving that to a corporation whose loyalty lies with their shareholders, not their end users.

Solar leasing became very popular when solar loans seemed out of the reach for most people. After all, installing a solar electricity system is not inexpensive. Generally, it will cost between $14,000 and $16,000 to install a system in the United States, after the federal solar tax credit is applied.

When solar panels were expensive, leasing your solar panels made a lot of sense because they allowed consumers to avoid expensive investments upfront. As prices for solar panels have dropped nearly 70% in the past 10 years, however, it may make more sense to take out a solar loan to install the system on your roof instead.

Like home-equity loans, solar loans provide homeowners a way to finance their solar system without putting down tens of thousands of dollars at the beginning. Like a solar lease, you have a fixed amount to pay every month on the loan, with the added benefit of owning the system once the loan is completely paid off. One disadvantage of taking out a loan is that you are then responsible for maintenance and performance monitoring.

Should you lease your solar system?

The strongest pitch for solar leasing is that the panels are “free” because you don’t have to pay for the installation of them upfront, choosing instead to pay for them over time through a set payment. While this arrangement made sense when interest rates were high and panels were expensive, that is less the case now. Interest rates, though rising, are still at historic lows, and the prices for solar modules themselves have never been lower.

If you don’t qualify for the federal solar income tax credit or don’t have the credit score necessary to get a solar loan, leasing may still make some sense for you. But if possible, installing your panels with a solar loan makes sense for most consumers. After all, a solar loan allows you to actually own the system. It makes it easier to include as part of future home sales, and once the system is paid off, electricity generation is essentially free.

Don’t make any decisions, however, without getting installation quotes from several local installers. This will provide you with the broadest number of options and help you decide what financing method will work best with your budget and your long-term housing plans. Getting multiple quotes will ensure you get the best price for your system, which will factor into the decision about what financing works best for you.

What You Need to Know:

To find out what your system could cost and whether a solar lease is the best method of financing, use Enphase’s system estimator.

Get Started Enphase
Questions? Contact us. We'll help you build your system, today.
Get Enphase